Hello everyone!
We have some fun news to share with you in this week’s News Flash, but first we’d like to announce our Steam sale!
If you’ve been itching to play Re;birth1 and Re;birth2 on PC, before Re;birth3 comes out on VITA, then now is your chance!
Re;Birth1 and Re;Birth2 are both 50% off for the Steam Summer Sale! 51% for DLC!

Hyperdimension Neptunia Re;birth3 Limited Edition is sold out! Thank you so much for supporting us. If you didn’t manage to secure a pre order, then you’ll definitely want to hear our next announcement... 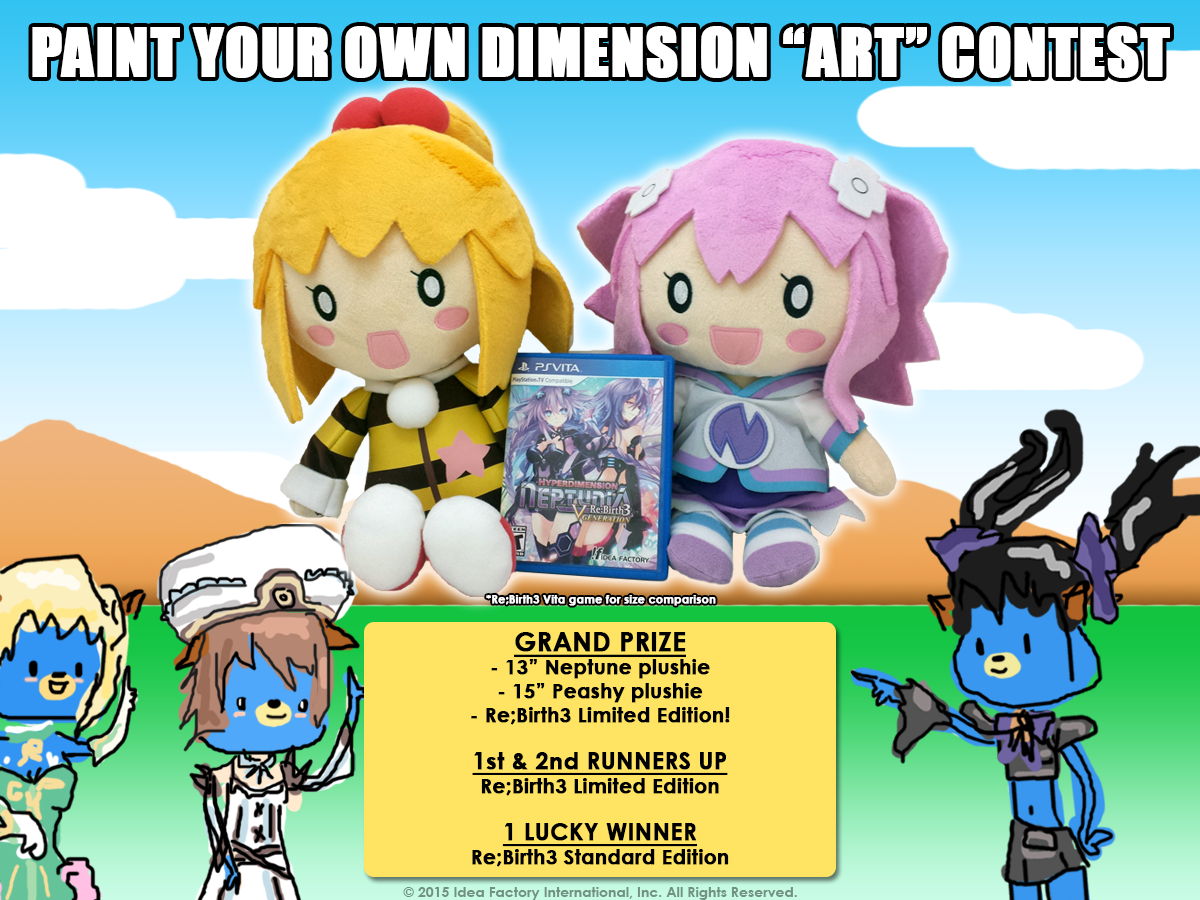 Now on to some fun news! We’re holding a Paint Your Own Dimension “Art” Contest!

Draw a brand-new Neptunia dimension of your own; familiar, otherworldly, or what have you, all while using only your mouse and MS Paint, PaintTime, or similar amateur digital drawing tools (no Photoshop allowed)! Entries will be judged on creativity above all else. Make sure you include a backstory for your dimension!

Anyone (worldwide!) can compete and any dimension goes! There will be one grand prize winner and two runner ups!

But that’s not all! To make sure everyone can participate, you can share our contest post on Facebook or retweet our contest tweet on Twitter and that will enter you into a randomized drawing for a standard edition of Re;Birth3: V Generation! One lucky person will win!

Contest ends Friday, June 19th, at 10:00am! Winners will be announced the very same day!

HOW TO ENTER THE CONTEST

E-mail contest@ideafintl.com with a picture (max. file size: 3MB) of your entry. Limited to one entry per person. Remember to include your full name, your mailing address, and your phone number! This information will only be used if you win the contest(s), and we will not share your information with any other companies. Submissions without complete information will not be eligible.

The subject line for your entry should read: Neptunia Paint Contest.

The deadline is Friday, June 19th, at 10:00am. By submitting your entries, you are giving express consent for Idea Factory International to share your pictures online.

Winners will be announced later the same day! All entries (non-winning and winning) will be posted on the Idea Factory Facebook page with winners’ first names and last initials.

Those who win prizes can expect their items to be shipped out shortly after the release date of Hyperdimension Neptunia Re;Birth3: V Generation (30th June). Shipping times may vary depending on your location!

There will be 1 Grand Prize winner, 2 runners-up, and one lucky winner.
Tweet